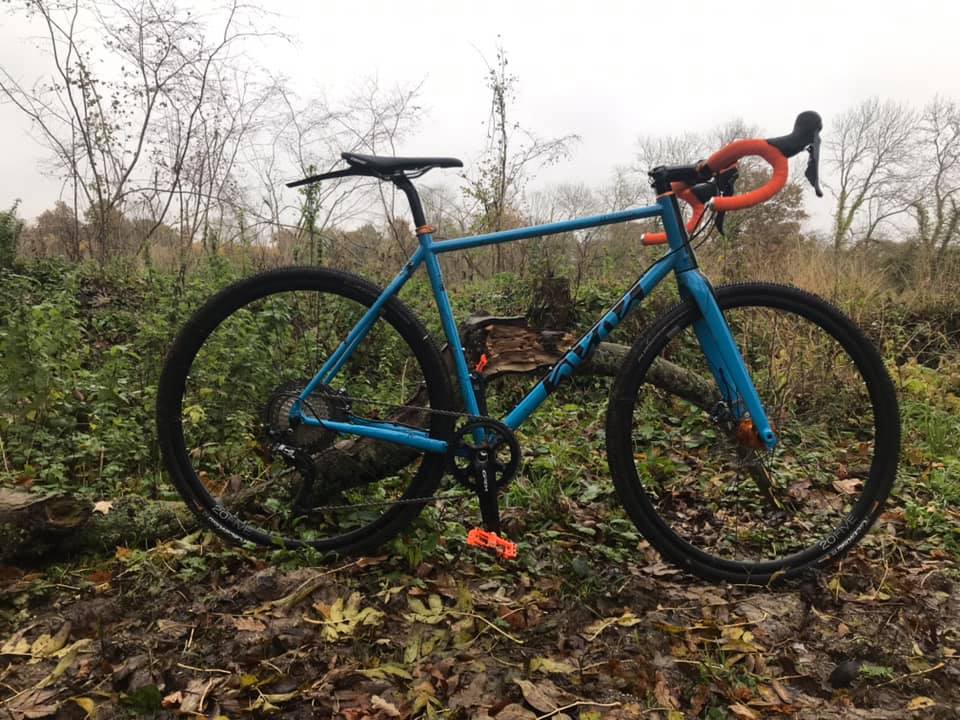 Gravel bikes… WHY? by Tim Little

I guess it starts back almost 5 years. I had a breakdown, 2 in fact, all thanks to several factors including injury, ongoing pain, illness, and a very un-sympathetic employer that I had been with for 11 years.

Prior to this I was actually fairly active sportsman, climbing, badminton( playing at a very high local division) and cyclist, out a t least once a week with a couple of friends, 10-20 miles of an evening.

After my breakdowns I pretty much shut down. I won’t go into the details of the initial years, suffice to say that I have been to the edge of some very very dark places and have only just returned. I have a great support from my partner Ruth and kids and a few friends and family.

I should also add that I have been diagnosed with severe depression, bipolar.

Exercise in any shape or form stopped. My bikes gathered dust, my running shoes got put away and I retired from badminton which I had played to a very high standard since I was 4 years old. That major part of my life stopped almost overnight and I couldn’t get the impetus to try and get it back. I just couldn’t, and anyone that has gone through this kind of thing will understand. You just can’t!

Now on to the main question… gravel bike? It sounded like a massive marketing ploy when I first looked into it, in all honesty it still seems like a marketing ploy, but I’m buying it!

I’m 42, at least 3 stone over weight and now in the mental space healthy enough to want to do something about it.

The following are questions I have been asked, and I have asked myself

But why not use my current flock of bikes?

I hate the hybrid. Its uncomfortable, heavy, and anything further than about 5 miles kills my back, so it will be up for sale in the spring.

The mountain bikes I love, but they’re overkill for all bar about 3% of the trails near me in Hampshire and currently to ride even my beautiful Stanton up a kerb would likely kill me in my current state! I want to be able to do them justice and not lose my lunch on any given climb. Plus the majority of trails where I live require at least 5 miles of road riding to get to

So why not get a pure road bike?

They’re dull. I had a Cannondale synapse 105 which was mightily comfortable. But I just found riding it boring. No decent views, most roadies looked miserable when they were out and none of them ever said hi (like mountain bikers almost always do). And while that may just be where I live they’re just not for me.

That brings me onto the gravel bike.

It has, to me, the perfect mix of on and off road ability. I can ride fast to the local trails and not be tired by the time I get there. They have the off road ability to cope with everything Hampshire and surrounding counties where I ride, can throw at them.

So onto the bikes….

I do research, to the point of obsession… materials, spec, bikes available, maximising my budget with deals and discounts. Squeezing as much juice as I can. I join forums (I am already a long time poster, though not for a while, on Single Track World (STW)) Facebook groups and ask as many questions as I can. Research, research, research! Pisses the boss off no end. It stops me sleeping, causes me anxiety and bouts of depression. But I can’t not, it’s how I do everything when it comes to expense, whether for me or the family!

So I have spent the last 3 months looking at bikes and everything to do with them, and the last few weeks organising test rides. I came down to a few bikes that really pinged for me. The Bombtrack EXT, Sonder Camino Ti, Cotic Escapade, Handsling CEX evo G and the Forme Monsal.

Initially I wanted to stay British, preferably steel, with bike packing ability. But the more I looked into the bikes and their abilities, watched YouTube and read reviews on them I came to the conclusion that maybe what I thought I wanted wasn’t what I actually needed.

After the first test ride of the Bombtrack that was really bought home to me. It didn’t feel right. Too safe, too predictable, heavy and designed to be exactly that, a mile munching tank that could be loaded up and ridden miles. Not quite for me and my (once fit) riding style. Maybe something that, once I was fit enough, could try to kill me on climbs or throw me off in the hedge, but wouldn’t do that till I was ready.

Next I went onto the Sonder Ti. I was looking forward to riding it as I had seen lots of good things, I went to see Rich in the Hathersage Alpkit store and had a good chat with Rich, then took the bike for a burn up the lane and back. Did not like it at all, yes it was a fast test and probably didn’t give it everything it deserved, but I am very much of the opinion that you know if a bike is for you. The bars were so flared that the hoods were at a very odd angle and braking was an issue (I have a wrist injury that limits some movement). The reach was good, as was the stand over, it just felt wrong. Shame as I like Alpkit and Sonder as brands, I own a fair chunk of Alpkit stuff and it’s all good, I suspect that goes across to their bikes too, and certainly follows on from what I have read.

While up in Derbyshire I want to Cotic and spoke at lengths to Hannah and had a good carpark test of the Escapade. While I was doing that my kids went and bugged Richard and Will (they wanted to meet Otto and Holly the dogs) who were great and gave them LOADS of stickers!

The bike felt great; planted, stable yet a little wild around the edges. The specs are spot on and customisable. If I hadn’t got other bikes to test it would have been bought there and then! I did however put a reserve on the frame!

I can’t speak highly enough of them though. I’ve not actually met a friendlier, more personable bunch in the cycling world!

It’s the 2nd of November 2019 as I write; next Monday I am off to meet Steve of Handsling bikes and Wednesday I have a test ride of a Forme Monsal at Pankhurst Cycles. Both of these bikes are carbon lovelies, one is designed and put together less than 20 miles from me. Let’s see what they have to offer….. 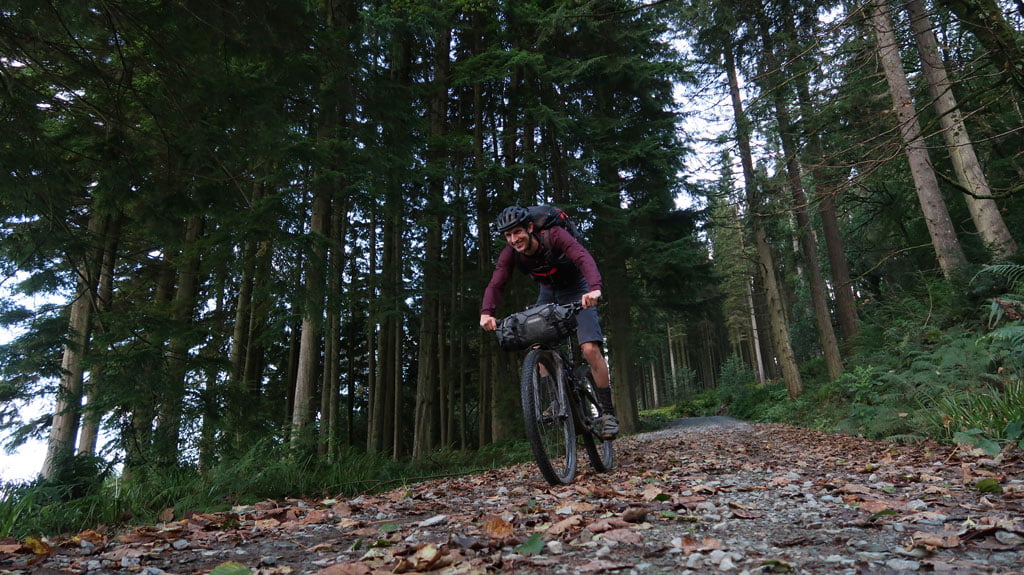 Leave the car behind, catch the ferry and have an adventure in Dunoon 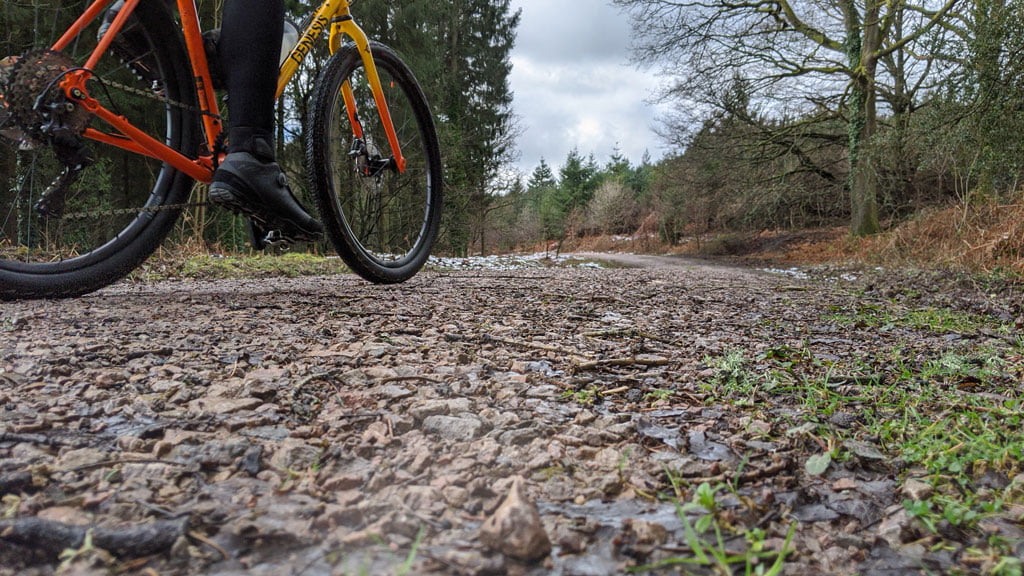 DirtyDevil.cc presents a new series of gravel rides in the Forest of Dean